Ottawa, ON, August 15, 2016 – According to statistics released today by The Canadian Real Estate Association (CREA), national home sales declined for a third consecutive month in July 2016. 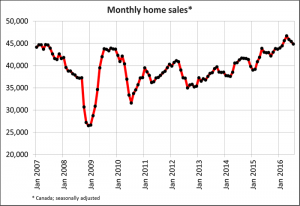 The number of homes trading hands via Canadian MLS® Systems fell by 1.3 percent month-over-month in July 2016. With similar monthly declines having been posted in May and June, national sales activity in July came in 3.9 percent below the record set in April 2016.

Sales activity was down from the previous month in slightly more than half of all markets in July, led by Greater Vancouver and the Fraser Valley. Transactions in these two markets peaked in February of this year, and have since then dropped by 21.5 and 28.8 percent respectively. Accordingly, much of the national sales decline in recent months reflects slowing activity in B.C.’s Lower Mainland.

“National sales and price trends continue to be heavily influenced by a handful of places in Ontario and British Columbia and mask significant variations in local housing market trends and conditions across Canada,” said CREA President Cliff Iverson. “All real estate is local, and REALTORS® remain your best source for information about sales, listing and price trends where you live or might like to in the future.”

“Home sales continued to trend lower while price gains further accelerated in the Lower Mainland of British Columbia,” said Gregory Klump, CREA’s Chief Economist. “This suggests that sales are being reined in by a lack of inventory and a further deterioration in affordability. The new 15 per cent property transfer tax on Metro Vancouver home purchases by foreign buyers took effect on August 2nd, so it will take some time before the effect of the new tax on sales and prices can be observed. That said, the new tax will do little in the short term to increase the supply of homes.”

Actual (not seasonally adjusted) sales activity was down 2.9 percent year-over-year (y-o-y) in July 2016, marking the first y-o-y decline since January 2015 and the largest since April 2013. In line with softening activity in the Lower Mainland, y-o-y increases have been losing momentum since February 2016. Sales were down from levels one year earlier in about 60 percent of all Canadian markets, led by Greater Vancouver, the Fraser Valley, Calgary and Edmonton.

The number of newly listed homes rose by 1.2 percent in July 2016 compared to June. While new supply climbed in fewer than half of all local markets, increases in Greater Vancouver and the Fraser Valley, Greater Toronto, Calgary and Edmonton outweighed declines in smaller markets.

The ratio was above 60 percent in about half of all local housing markets in July, virtually all of which continue to be located in British Columbia, in and around the Greater Toronto Area and across Southwestern Ontario.

There were 4.6 months of inventory on a national basis at the end of July 2016. This is unchanged from readings in each of the previous two months and continues to indicate a tight balance between supply and demand for homes.

The number of months of inventory has trended lower since early 2015, reflecting increasingly tighter housing markets in B.C. and Ontario. It currently sits near or below two months in a number of local markets in British Columbia and in and around the GTA. Indeed, some regions in the GTA are down to just a couple of weeks of inventory. 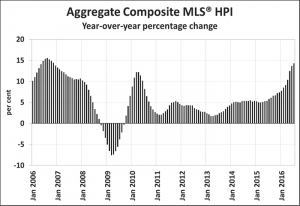 For the sixth consecutive month, y-o-y price growth accelerated for all Benchmark property types tracked by the index.

While prices in 9 of the 11 markets tracked by the MLS® HPI posted y-o-y gains in July, increases continue to vary widely among housing markets.

The MLS® Home Price Index (MLS® HPI) provides a the best way of gauging price trends because average price trends are prone to being distorted by changes in the mix of sales activity from one month to the next.

The national average price continues to be pulled upward by sales activity in Greater Vancouver and Greater Toronto, which remain two of Canada’s tightest, most active and expensive housing markets. The actual (not seasonally adjusted) national average price for homes sold in July 2016 was $480,743, up 9.9 percent y-o-y.

If these two housing markets are excluded from calculations, the average price is a more modest $365,033 and the gain is trimmed to 7.0 percent y-o-y.

The Canadian Real Estate Association (CREA) is one of Canada’s largest single-industry trade associations, representing more than 115,000 REALTORS® working through some 90 real estate Boards and Associations.

Further information can be found at http://www.crea.ca/statistics.